There’s a typhoon outside and that’s literal. From the balcony windows, we watch slanted sheets of rain rush from the sky. Storm winds sway the native Arecaceae and shoo debris every which way like a rag doll. It’s all swooshing and swirling and rushing, but we live in the Fort.

That’s not a literal fort structure. It’s Fort Bonifacio, aka BGC, aka Global City. It is a former military fort—originally named Fort McKinley after US President McKinley (circa 1902) and later renamed Fort Bonifacio (circa 1957) after Filipino hero Andres Bonifacio. Today, however, there are few remnants of that former fort world, though I’m sure typhoons hit then as Typhoon Mangkhut strikes now. What did it all look like back then? Today, the Fort is comforted by posh apartments and very well air-conditioned malls and shopping strips. We live on one side of the Fort, and then there is the other side.

On the topic of forts, some change and some stay the same. The people of Oguaa founded the city of Cape Coast, which later became a Portuguese trading fort post, which later became a Castle by way of the Swedish Africa Company, which then moved to Dutch hands, and then on to the British, wherein it became a dungeon for slaves before they were sold and shipped to the New World.

On the western-most tip of the African continent, there’s a similar structure erected on Goree Island in Senegal. Another West African slave fort, one of thousands.

Where do storms come from anyway? Typhoons and hurricanes? From the ocean, from the tides, from the heat and humidity. Hurricane Florence was once just a rain shower in Dakar.

US Soldiers are fleeing to Fort Bragg to help those whose forts could not hold up to Hurricane Florence, that flood-maker. Some folks are stranded, maybe waiting it out on a rooftop or wading through a neighborhood street that was, just a few hours earlier, asphalt, curb, and sidewalk.

It’s no surprise that Fort Bragg is at the epicenter of the relief in the Carolinas. It is one of the largest military installations in the world. Confederate Army officer Braxton Bragg (for whom Fort Bragg is named) would be honored to see how American troops rally for those in need.

To see how America rallies for all people in need.

(To see how America rallies for all voices not because we ‘tolerate’ but because we ‘accept’ and listen to all voices? We the People. To see how the leaders of America “establish Justice, insure domestic Tranquility, provide for the common defence, promote the general Welfare, and secure the Blessings of Liberty?” We the People…)

Does it always take a storm to rally like that?

I’m not sure where typhoons come from, but it must start from something afar, too, like with the hurricane. Most of the Mangkhut’s damage will be in northern Luzon and then move on to Hong Kong and mainland China. 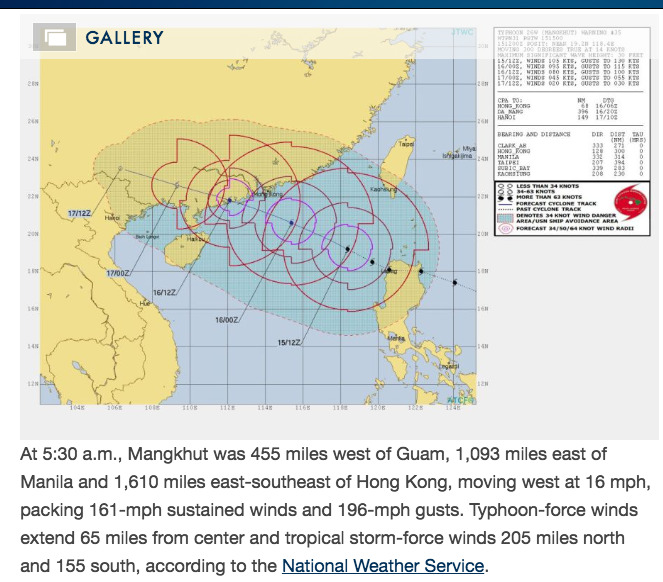 Filipinos are already talking about the damage. What’s to come. My mom drove to Virginia to avoid Florence. Who wants to sit through a storm without some atom of assurance that the sun will shine again?

I feel guilty as hell watching it all from through my window.

We all need a fort.

Typhoon Mangkhut is hitting the Philippines, while Hurricane Florence hits the east coast, and I see the news is covering both pretty heavily. Funny how storms strike and how the world reads about it.